This year the State of Israel will celebrate 70 years of independence. The price of this independence does not come cheap, in fact it still being paid, nearly seven decades later. Who are those who are responsible? It is the IDF reservists, the backbone of the army, who drop everything to put their uniform back on. As Israel goes from the sombre Memorial Day to the joyful Independence day, spend time with the combat reservists of My Unit.

When the State of Israel was declared, the nascent Israel Defense Forces was a far cry from the vaunted military that it is today. Formed from the pre-state Haganah militia, it creatively took advantage of all the resources available to it, including a horsemen unit. In Kiddo, director Ofra Shahor talks with her father about his adventures in the unit during the Israeli War of Independence. Like many stories of Israeli history, the personal and national are intertwined. As he relates his part in this fundamental moment in history, the relationship between father and daughter will undergo a change.

This week Jews around the world will sit down to the Passover seder and “relive” the exodus from Egypt, eating unleavened matzah in commemeration of the quick exit from bonadage which left them no time to allow their bread to rise. One of the other commandements of the seder is to think of oneself as having experienced personally the journey from the bondage of slavery to life as a freeman. In the modern age it is difficult to imagine that experience. In Pizza in Auschwitz, Danny Hanoch, a Holocaust survivor, as a freeman returns to the site of his bondage, the Birkenau death camp where he enjoys the leavened luxury of pizza in the bunk where he was once a slave.

15 years ago today, on Passover eve, as Israelis were sitting down to the Passover seder in the Park Hotel in Netanya, a suicide terrorist bomb exploded killing 30 and wounding another 140. This was the deadliest attack of the Second Intifada, and following it Israel declared a state of emergency and a massive call up of reservists, leading to Operation Defensive Shield. Eight days after the reserve call up, 13 officers and soldiers of the Nachshon Battalion were killed in one of the deadliest days for the IDF since the end of First Lebanon War. In Jenin, War Diary, filmmaker Gil Mezuman, himself one of the soldiers of the battalion and a part of the fighting, chronicles the aftermath of this attack his comrades in arms experienced.

This week was not the first nor the last time that terrorism has struck London. From attacks by the IRA to the Underground bombings of July, 2005, the capital of the United Kingdom has seen it’s fair share of terrorism. It has also not been immune to the impact of Middle Eastern politics. In 1978 Yulie Cohen, an El Al flight attendant, was wounded in a Palestinian attack on her and fellow crewmemebers while getting off a bus at a London hotel. More than two decades later she attempts reconcilliation with her attacker. She documents her journey in the film, My Terrorist. 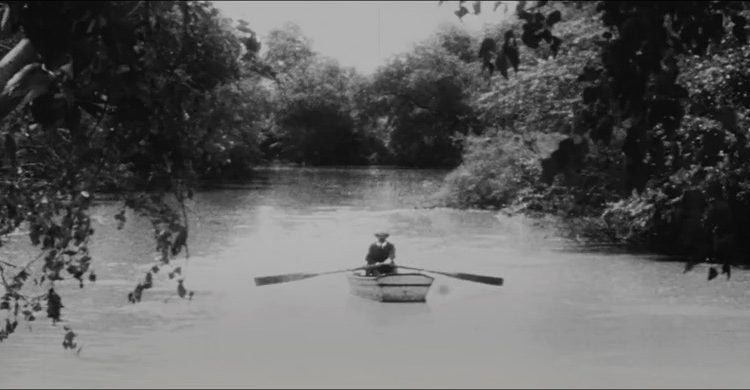 There is a certain romance to the allure of floating down a river. From Mark Twain’s love affair with the Mississippi to Bogie and Bacall in the African Queen, we have always found escape in the flowing, meandering paths of the iconic waters of history; the above mentioned Mississippi, the Amazon, the Nile and the biblically famous Jordan. Though the Jordan is possibly the most famous of the rivers found in the Holy Land, it may come as a surprise how many others flow through the ancient landscapes. The Yarkon for one, the second largest river in Israel, is found through what is now central Israel, Tel Aviv and its environs, a highly, densely populated region that contains much of modern Israel’s urbanity.

The film “Winding”, like the paths of the rivers, takes us on the winding, twisting and changing paths of the Yarkon River from the days of the first Zionist pioneers to more recent times. It is a journey that follows the change and growth in the region and its effects on the river itself, in many ways paralleling the social changes in Israel itself. Charting the early days of Jewish construction along its banks, we are told the story of how it became one of the symbols of resurging Jewish nationhood and the endless optimism that was bound up in reclaiming the land. However, there was an environmental cost to this development in the land of milk and honey. Through a combination of urban growth projects in the 1950s, including the opening of the Reading Power Station near its mouth, and the Yarkon-Negev water pipeline (as part of the national water carrier, designated with pumping the waters of the Yarkon south to the parched desert regions of the Negev), the river’s state deteriorated. It grew so bad, that to the modern resident of Tel Aviv, the thought of entering its waters was not taken lightly. In fact, as documented in the film, at the 1997 Maccabiah Games in Tel Aviv, Four participants lost their lives when a bridge they were crossing collapsed into the Yarkon. It wasn’t the collapse that eventually killed them, but because of the highly polluted waters, they contracted a rare and deadly fungus that was the cause of their deaths.

Mimicking the Yarkon’s pathways, the film utilizes a narrative structure eschewing traditional “talking heads”. The story of the Yarkon’s history is related in an intertwining narrative of those interviewed for the film. Their recollections are presented without any preamble or introduction to the figures behind the stories. It is the collective memory of those who grew up along the banks of the river, who witnessed the decline from a lush, thriving environment into an environmental disaster and its subsequent (and ongoing) restoration and revival. As we float amongst their stories, we are treated to footage of the river itself, both archival images from the early days and more recent filming of the depleted, murky river of today.

The myth of the early “halutzim”, or Zionist pioneers, was that they were reclaiming the land. However as time would tell, many of these projects ironically caused more ecological damage (for instance draining the Hula Valley). In “Winding” we are treated to the history and impact of these projects on the Yarkon. The way in which it relates the modern history of the Yarkon River echoes the byways of the river itself and parallels the growth of the state of Israel. In combining the anonymous voices of all the story tellers it becomes a tale of Israeli society as a whole, one that it behooves us to heed.