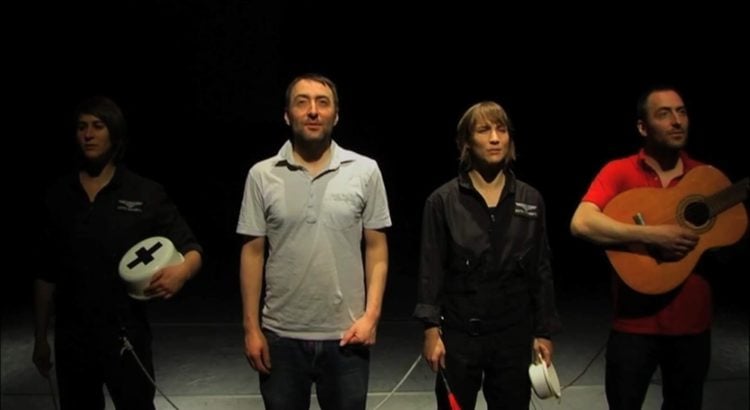 Artistic collaboration is always a complicated endeavor. The desire to realize one’s vision, that creative push is difficult even in the best of situations, the struggle with one’s own inner voices of criticism, always wondering if this is good enough, can it be tweaked just once more to make it just that much better. To do so in collaboration with another is to bring that voice alive, to take it out of your head and vocalize it in another body, one with its own desires, reasoning and logic that at times is at odds with your own. Now add into that already potentially combustible situation a sibling collaboration, and everything is suddenly turned up exponentially.

“Envelopes” is the name of a dance concert featuring two sets of siblings, Israeli dancers, Keren and Reut Levi, and British musicians, (and identical twins), Tom and Alex Parkinson. The concept of the show is to celebrate the kinship ties of blood, music and dance. “Inside Envelopes” takes us into the creative process as these two family groups put together the production.

The three ‘envelopes’, i.e. sections of the show, that we get a look inside of, correspond to the relationships within the group. While the two different sets of siblings is obvious, less so is Karen and Tom. At one point they were in a romantic relationship as well, but as that didn’t work out they maintained a professional one. This just adds fuel to the collaborative fire. Keren is a demanding choreographer, and she expects no less from her partners.

The relationship between Keren and Reut is complicated. With a 12 year age difference, they might have each been only children. By the time Reut came along, Keren was already deeply involved with dance and not really home and as an adult Keren lives in Amsterdam. The “Envelopes” project is a chance for the two of them to, not so much reconnect, as connect in the first place. It is fitting then that their dance has the two connected by a rope, pushing and pulling between them.

Tom and Alex’s “Envelope” is to have the two of them playing music in tandem. While their history is not as complicated as the Levi sisters, they do not often get a chance to play music together these days. For them it is a reconnection. That isn’t to mean that their process is any less complicated than that of the sisters. There may not be a physical rope connecting them, but the emotional one is no less strong. The push and pull to find the correct beat, to open their envelope and read what is inside.

The film understandably pays less attention to the third “Envelope”, that of Keren and Tom, as it doesn’t pack quite the emotional baggage as that of siblings. In fact it isn’t until deep into the film that their former relationship is brought up, though it comes as no surprise. It also serves as the catalyst for one of the blowups that threaten the project. Keren’s assertiveness isn’t only on the dance floor. Or more accurately, her controlling nature, which serves her well as a choreographer and dancer is not conducive to successful personal relationships, whether romantic or familial.

One other thing of interest in the film, is that while Tom and Alex are identical, which understandably makes it difficult to determine who is who, Keren and Reut, in spite of the large age difference between them, bear a striking resemblance to one another. This is accentuated in the “Envelopes” production as they are dressed alike.

“Inside Envelopes” is a frank look at the creative process, further complicated by the bonds of sibling-hood.
Watch the film here