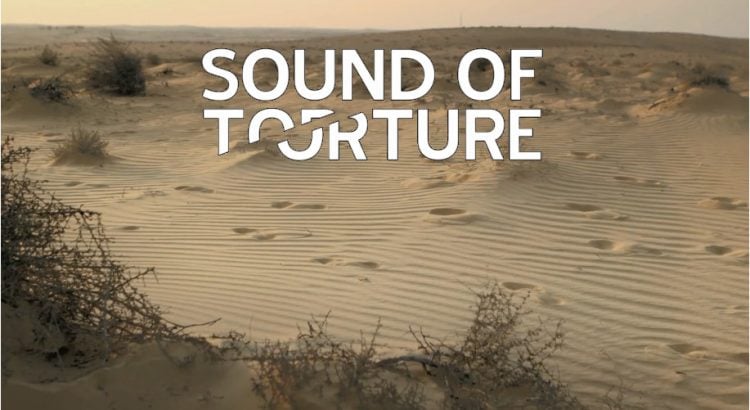 Life is not a fairy tale. Well, maybe it is, but not the happy ending kind. More like the original stories the Brothers Grimm collected. The kind where the dark and dangerous lurk around every corner, where Cinderella’s stepsisters cut off their toes to fit the glass slipper, Red Riding Hood is eaten by the wolf and Hansel and Gretel aren’t saved but rather cooked by the witch. We try to protect ourselves and loved ones from this dark reality, to think that the stories are just legends of a bygone time, and enjoy the happy ending version, but the world can be a cruel place.

In “Sound of Torture” the dark and dangerous fairy tales reign. Eritrean refugees, seeking their own happy ending, make their way through Sudan and Egypt to the Israeli border. If they are lucky they are able to cross, ostensibly to a better life. The unlucky ones are kidnapped in the Sinai and held captive until their loved ones pay a hefty ransom in the realms of tens of thousands of dollars. And even that does not guarantee freedom, they still need to cross the border, but are just as likely to be sent back to their home country. The time in captivity is no picnic either, there they are shackled, beaten, starved, and raped. However the true torture, the most painful sound, is the phone calls from the captives to their loved ones.

In a cruel twist of fate, the kidnappers give their captives cell phones so they can contact their family to raise the funds for their release. They hear first-hand what the captives are going through, often in real time as they talk. This psychological torture is far more effective than being held incommunicado. To know every day what they are going through, to be in communication but unable to do anything about the situation but attempt to raise the funds in any way possible.

The film centers on Meron Estefanos, an Eritrean journalist living in Sweden and the story of two women held captive. Meron broadcasts calls from the captives on her weekly radio program and attempts to communicate with the kidnappers. Her show has become an important focal point for both the captives and their families. In the film she travels to Tel Aviv to meet first hand with the people she has helped and later to Sinai to try and find out more information on the hostages. Ironically, in Sinai she drives right by the presumed prison camp, but is helpless to do anything. There is also a bittersweet reunion with one of the first captives she helped release. The emotional strain causes her to lapse into what is clearly a PTSD flashback. Meron’s joy at the meeting is tempered by the pain this woman has gone through. This same sentiment runs through all of her meetings with the refugees. Each story of failure weighs on her, and the price of each success no less.

What is the answer? A discussion among the refugees to consider not paying must be unanimous, otherwise it has no teeth. Unspoken is the reality that more likely than not the kidnappers will just kill them all and try again. They are trapped in an international no man’s land without legal status. Returning home to the oppressive military dictatorship is as dangerous as the trek through the Sinai, perhaps even more so. In Israel their status is murky, and part of a larger political and social debate. There really is no happy ending to this story. One can only hope that the scars will one day fade and the victims, both the captives and their loved ones, will no longer be able to hear the “Sound of Torture”.

15 years ago today, on Passover eve, as Israelis were sitting down to the Passover seder in the Park Hotel in Netanya, a suicide terrorist bomb exploded killing 30 and wounding another 140. This was the deadliest attack of the Second Intifada, and following it Israel declared a state of emergency and a massive call up of reservists, leading to Operation Defensive Shield. Eight days after the reserve call up, 13 officers and soldiers of the Nachshon Battalion were killed in one of the deadliest days for the IDF since the end of First Lebanon War. In Jenin, War Diary, filmmaker Gil Mezuman, himself one of the soldiers of the battalion and a part of the fighting, chronicles the aftermath of this attack his comrades in arms experienced.

This week was not the first nor the last time that terrorism has struck London. From attacks by the IRA to the Underground bombings of July, 2005, the capital of the United Kingdom has seen it’s fair share of terrorism. It has also not been immune to the impact of Middle Eastern politics. In 1978 Yulie Cohen, an El Al flight attendant, was wounded in a Palestinian attack on her and fellow crewmemebers while getting off a bus at a London hotel. More than two decades later she attempts reconcilliation with her attacker. She documents her journey in the film, My Terrorist.