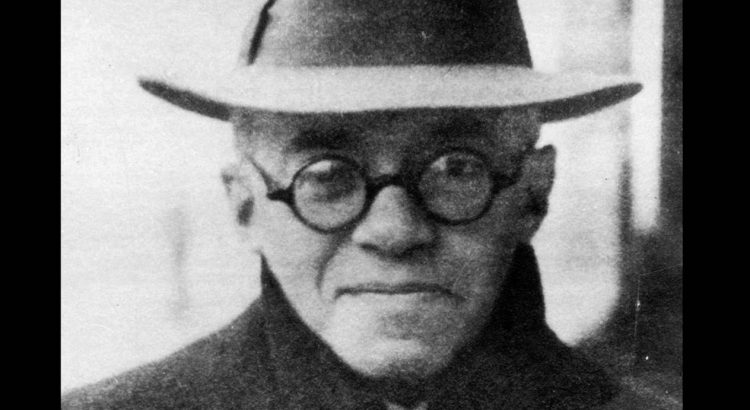 There is an easy tendency to consider Ze’ev Jabotinsky’s legacy as a purely political effort. After all, he did establish Revisionist Zionism, the ancestor of today’s modern Likud party. In the pre state era it stood as the main ideological competitor to the dominant social Labor Zionists, and in considering today’s political landscape and length of time in which the Likud has maintained the Israeli Premiership, it would seem that it has far surpassed its earlier competitor. However, the film “The Raven” (one of a series titled “The Hebrews”), only delves into Jabotinsky’s political life insofar as it relates to his other, and in many ways more lasting achievement, as one of the voices involved in the fabrication of the modern Hebrew language. His use of language, particularly in his translations, did wonders for enriching the emerging tongue. Coming up with new and interesting methods to not only change the words into Hebrew, he also conceived of new additions to convey meaning and tone, the underlying cultural subtext of language that often gets lost in translation.

Quite possibly the most amazing thing about Jabotinsky’s life, is that even though he was a high school dropout, he became a man of letters in 8 or 9 different languages, attaining proficiency in almost all of them. When he chose to improve his Hebrew, he elected not to rely on the use of a dictionary, but rather with warts and all make his mistakes as they come. In the process he refined his language abilities, which would become useful later as a translator.

It wasn’t until later in his life that he became interested in the Jewish issue. The early part of his life the connection with his people was trivial at best. It took a train ride, in third class, through the heart of Eastern European Jewry to expose him to what would ultimately transform him into one of the most influential Jewish Zionist figures. He would say that he heard more Yiddish in that one train ride, then all his previous life. The intensity of his experience would change him forever.

Of course, it wasn’t just his way with the burgeoning Hebrew language. He proposed and eventually succeeded in establishing the Jewish Legion of the British Army, the first Jewish fighting force in nearly 2,000 years, not to mention Jewish self-defense groups in Russia. He also had a vision for moving the bulk of Polish Jews to Palestine, in 1936, years before the actual outbreak of war and the implementation of “The Final Solution”. The plan stalled when the British government prevented it.

Without a doubt Ze’ev Vladimir Jabotinsky was a man of many layers. His everlasting impact on the Jewish people, and the Zionist project in Palestine is felt even today. That is in contrast to the end of his life. He never did find his way as a Zionist leader in the land of Israel. After the British banned him from Palestine, he wandered the world. This more properly fit his cosmopolitan attitudes. In spite of his military life, he preferred the acculturated lifestyle. And perhaps that is fitting for a man of letters who profoundly changed not only the politics of the Jews, but the way in which their ancient language became a modern, living breathing entity. Watch the full movie